Are we doing all what we can to keep clean oceans?

Are we doing all what we can to keep clean oceans?

Having been around the world and the seven seas, it is becoming more apparent than ever that the health of our oceans has been deteriorating and it’s likely to have a long-term effect on our superyacht cruising grounds, anchorages, dive sites and beaches.

It is estimated that between four and 12m metric tonnes of plastic makes its way into the ocean each year. This figure is only likely to rise, and 2016 report predicted that by 2050 the amount of plastic in the sea will outweigh the amount of fish.

Where does plastic end up when you drop it in the ocean?

A lot of plastic debris in the ocean breaks down into smaller pieces and is ingested by marine life, and it is thought that a significant amount sinks to the sea bed.

huge amounts of plastic end up in 5 “garbage patches” around the world, the largest one being in the north Pacific. 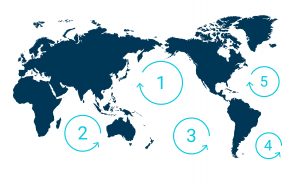 The Ocean Clean UP estimate that between 1.15 and 2.41 million tonnes of plastic waste currently enters the ocean every year from rivers, with over 74% of emissions occurring between May and October. The top 20 polluting rivers, mostly located in Asia, account for 67% of the global total. The findings of this study provide baseline data for ocean plastic mass balance exercises, and assist in prioritising future plastic debris monitoring and mitigation strategies. 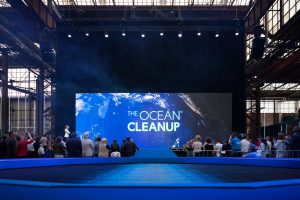 UTRECHT, THE NETHERLANDS, May 11, 2017 – The Ocean Cleanup, the Dutch foundation developing advanced technologies to rid the oceans of plastic, today announced it will start extracting plastic from the Great Pacific Garbage Patch within the next 12 months. The Ocean Cleanup further announced that parts of its first cleanup system are already in production. Thanks to an improved design, The Ocean Cleanup has increased the efficiency of the system, allowing for the cleanup of half the Great Pacific Garbage Patch in just 5 years.
Photo: Pierre AUGIER for The OCEAN CLEANUP

Click Ocean Clean Up to know more about them.

Apart of this, IQS-URL leads a project with the Barcelona World Race on the measurement of the concentration of micro-plastics in marine waters. 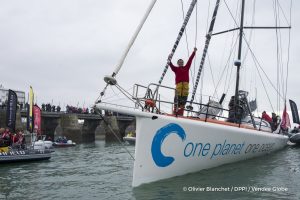 The ships taking part in the Barcelona World Race will help to gather data for a project on measuring the concentration of micro-plastics in marine waters, involving IQS-URL, and Sailing Technologies, the spin-off of the IQS-URL Materials Engineering Group (GEMAT). This is an unprecedented partnership between the world of sailing and the scientific community, which began three years ago and has been performed during the current edition of the Barcelona World Race.

Micro-plastics are particles that have a very negative effect on the life cycle of many species that ingest them and require special detectors to be located.

GEMAT has designed the whole analytical and sampling system and Sailing Technologies, with its experience in the top level sailing competition sector, has created the entire data management and geolocation system and other parameters relevant to achieving the project.

The vessel One Planet, One Ocean & Pharmaton from the team of the Barcelona Foundation for Ocean Sailing (FNOB) which organises the Barcelona World Race, has one of these devices for measuring the level of micro-plastics in seawater. The equipment comprises a system of filters and test tubes that collect and measure the particles and obtain data that will later be analysed.

The project, which has a significant educational environmental awareness component, is coordinated by the UNESCO Intergovernmental Oceanographic Commission (IOC-UNESCO) and led by chemical engineer Dr. Salvador BorrÃ³s, from IQS-URL. It also enjoys the support of the Institute of Marine Sciences (ICM) of the Higher Council for Scientific Research (CSIC)and FNOB.

The project to measure the concentration of micro-plastics is one of the four scientific projects involving vessels in the Barcelona World Race 2014/15 and prestigious universities and research institutions.

View all posts by: AdminArnaldo